On Friday night I saw Rihanna live in concert in the Aviva Stadium, Dublin. This was my third time seeing Rihanna live in Dublin, and it was yet another amazing experience. Her set was brilliant, really fun and upbeat, and very party-like. Her seven outfits for the Diamonds World Tour were just as good as her songs, embodied her latest album, “Unapologetic”, and were all custom made by some of the biggest fashion houses. Riri sang brilliantly live and gave it her all on stage. 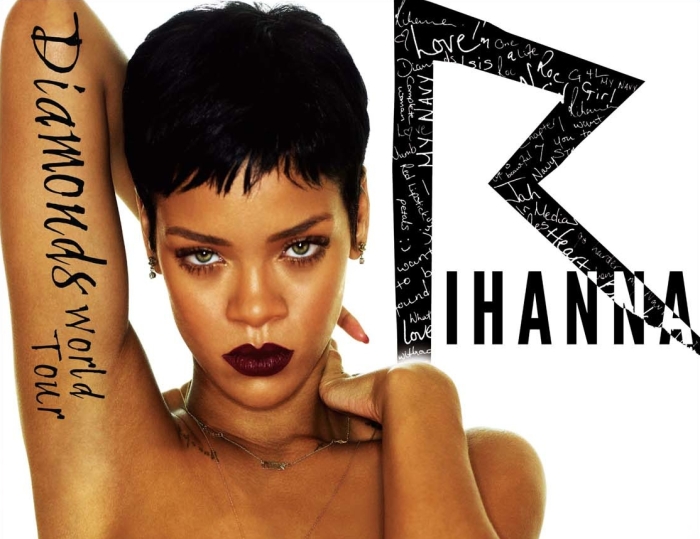 Rihanna opened the show with track #1 off her latest album, ‘Phresh Out The Runway’, wearing an all black everything cape with a rhinestone neckline, which she then threw off revealing the amazing coat, a fashion crossover of street and couture, all by Riccardo Tisci for Givenchy Haute Couture. The oversized bespoke parka coat features Givenchy ‘orgy’ graphic print in black and gold with stud-like notches along the hood. The look was finished with a long shirt with sheer body, a black bra with a white & gold star-adorned band, shorts in same embroidery & print as the coat and over-the-knee lace-up boots. Teamed with this sexy hood ensemble is a triple-sided gold shark tooth necklace engraved bearing “RIRI”. I absolutely loved this look. 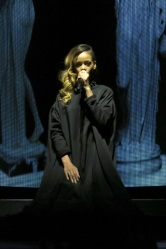 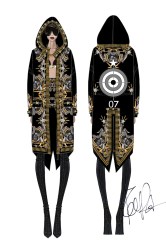 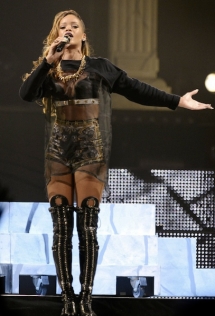 Round three came, and Rihanna’s Rihanna For River Island designer buddy, Adam Selman, helped create this colourful, sporty-fashion crossover look. An all-leather bralet and pants ensemble in red, yellow & black, features quilted leather and fishnet panels as well as knee pad-like sections. Riri teamed this look with white Manolo Blahnik boots. The look really epitomized the set’s songs including ‘Jump’, ‘Umbrella’, ‘All Of The Lights’ & ‘Rockstar 101’. She also performed one of my fav songs, ‘What Now’.

The next set was slow and sexy, with Riri changing into another Adam Selman custom creation, which reflected the Rihanna For River Island collection. The red jersey crop top and top-knotted wrap skirt ensemble with a Lynn Ban necklace, and Manolo Blahnik heels again. I loved her ballad renditions, especially ‘Loveeeeeee Song’ & ‘Cold Case Love’. 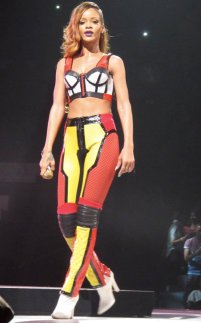 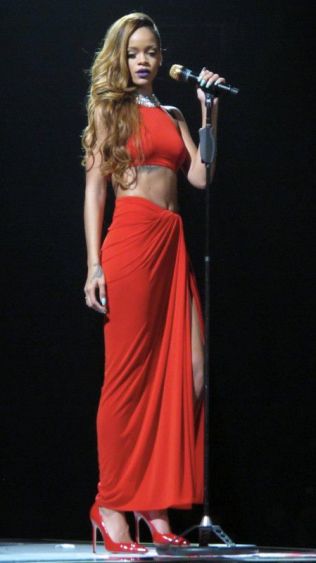 Set Five came shortly after these songs, changing into her next outfit, yet another Adam Selman number. This dollar-bill-print holographic dress and jacket looked more ‘Pour It Up’ than ‘We Found Love’, but nevertheless it was flashy like the set. The oversized jacket was taken off to reveal the wide-v neckline and halter cut of the dress with the word ‘ONE’ visible on the front, it was teamed with custom Pierre Hardy iridescent sneakers and 90s Vintage Gianni Versace sunglasses in lime & dark green. This set really had the crowd jumping and partying; it was an amazing atmosphere! 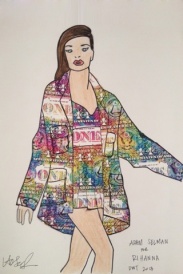 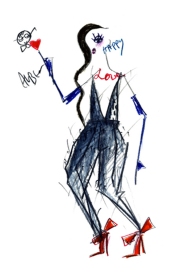 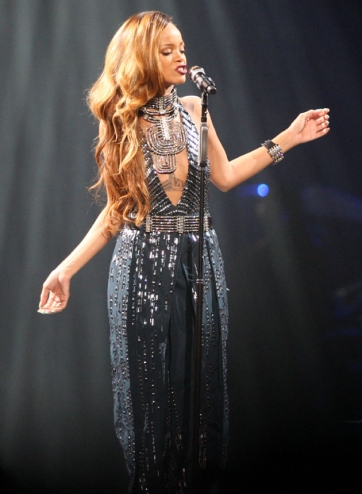